Let’s get the good stuff out of the way above the fold. Raspberry Pi 2 is now on sale for $35 (the same price as the existing Model B+), featuring:

Because it has an ARMv7 processor, it can run the full range of ARM GNU/Linux distributions, including Snappy Ubuntu Core, as well as Microsoft Windows 10. 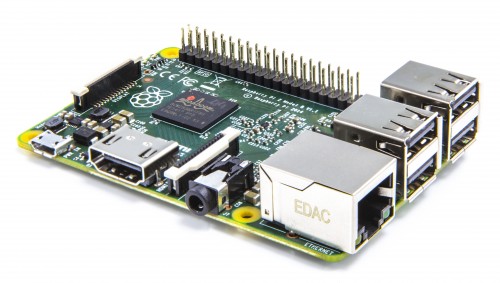 Since we launched the original Raspberry Pi Model B, back in 2012, we’ve done an enormous amount of software work to get the best out of our Broadcom BCM2835 application processor and its 700MHz ARM11 CPU. We’ve spent a lot of money on optimising a wide variety of open-source libraries and applications, including WebKit, LibreOffice, Scratch, Pixman, XBMC/Kodi, libav and PyPy. At the same time, the Raspbian project, run by Peter Green and Mike Thompson, has provided us with an ARMv6-compatible rebuild of Debian with hardware floating point support, and Gordon, Dom and Jonathan have spent thousands of hours working on the firmware and board support to make Raspberry Pi the most stable single board computer in the world. It’s worth going back and trying out an old SD card image from 2012 to get an idea of how far we’ve come.

Nonetheless, there comes a point when there’s no substitute for more memory and CPU performance. Our challenge was to figure out how to get this without throwing away our investment in the platform or spoiling all those projects and tutorials which rely on the precise details of the Raspberry Pi hardware. Fortunately for us, Broadcom were willing to step up with a new SoC, BCM2836. This retains all the features of BCM2835, but replaces the single 700MHz ARM11 with a 900MHz quad-core ARM Cortex-A7 complex: everything else remains the same, so there is no painful transition or reduction in stability.

First silicon arrived last year, as we can see in this professionally shot video from bringup night:

Once we were confident that BCM2836 was performing as expected, James designed a series of prototypes, before we settled on the Raspberry Pi 2 Model B that launches today. This has an identical form-factor to the existing Raspberry Pi 1 Model B+, but manages to pack in both the new BCM2836 and a full 1GB of SDRAM from our friends at Micron. All of the connectors are in the same place and have the same functionality, and the board can still be run from a 5V micro-USB power adapter.

Raspberry Pi 2 is available to buy today from our partners element14 and RS Components. Remember you’ll need an updated NOOBS or Raspbian image including an ARMv7 kernel and modules from our downloads page. At launch, we are using the same ARMv6 Raspbian userland on both Raspberry Pi 1 and 2; over the next few months we will investigate whether we can obtain higher performance from regular ARMv7 Debian, or whether we can selectively replace a small number of libraries to get the best of both worlds. Now that we’re using an ARMv7 core, we can also run Ubuntu: a Snappy Ubuntu Core image is available now and a package for NOOBS will be available in the next couple of weeks.

For the last six months we’ve been working closely with Microsoft to bring the forthcoming Windows 10 to Raspberry Pi 2. Microsoft will have much more to share over the coming months. The Raspberry Pi 2-compatible version of Windows 10 will be available free of charge to makers.

Visit WindowsOnDevices.com today to join the Windows Developer Program for IoT and receive updates as they become available.

Hardware
We use cookies on our website to give you the most relevant experience by remembering your preferences and repeat visits. By clicking “Accept”, you consent to the use of ALL the cookies.
Do not sell my personal information.
Cookie SettingsAccept
Manage consent